I've been spoiled for entertainment over the last week.

Last Friday was the opening night The Ballad of Backbone Joe, the latest but all-to-briefly showing production by The Suitcase Royale at the Arts House Meat Market, North Melbourne.

A clever combination of film noir and Fisher's Ghost, it was another fine example of the Suitcase boys' 'junkyard theatre' aesthetic, and a wonderfully entertaining show, though to my mind it felt a little undercooked - something I also felt about their Chronicles of a Sleepless Moon when I saw its first incarnation at the 2006 Next Wave Festival, mind you.

Given time, and fine-tuning, I have no doubts Backbone Joe - a rib-tickling tale of boxing and butchery - will reach similar heights of success. It already has the same quotient of unhinged tomfoolery!

On Monday night I saw a preview of the new Australian film by director Jonathan Auf Der Heide, Van Diemen's Land, a beautifully rendered story about terrible events inspired by the confessions of Irish-born convict and cannibal Alexander Pearce. I'll be reviewing the film in more detail in the coming days, but suffice to say I highly recommend it, as does fellow blogger Alison Croggon, whose thoughts about it you can read here.

Yesterday I saw another film, the new feature from director Ang Lee, Finding Woodstock, a gentle comedy about the people behind the scenes of 1969's muddy memorial to peace, love and live music. Again, I'll review it in more detail in the coming days, and again again, I very much liked it - certainly much more than I expected to! 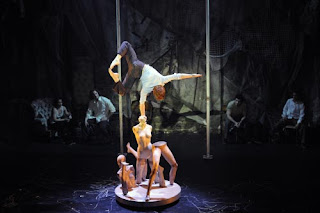 Tonight, I saw TRACES, only the second work from Canadian circus company Les 7 Doigts De La Main (The 7 Fingers), and an absolute gem. It's showing in Melbourne at the Comedy Theatre until August 29, and I highly recommend you check it out.

The last Canadian circus company I saw left me with a bad taste in my mouth, and yes, I'm talking about Cirque du Soleil and their show Dralion, which struck me as pompous, decadent, overblown and soulless.

The 7 Fingers are altogether different. The five young performers in TRACES are vibrant, exuberant, sexy and audacious; and their show is an exciting blend of contemporary circus arts, street skills, parkour and passion, set to a thumping soundtrack ranging from rock to drum'n'bass, including tracks by Vast, Radiohead and Nitin Sawhney.

In a makeshift shelter, five young people shelter from an impending catastrophe, defying the oncoming storm by fighting, loving and living life to the full. Inventive video and projection work enrich the versatile quintet's performances, which range from an exhilarating sequence based around two Chinese Poles and a bravura teeterboard act, to piano playing, hoop diving, a memorable skateboarding sequence seemingly inspired by Esther Williams' synchronised swimming routines, and a visceral and exciting German Wheel routine set to an folk-punk soundtrack (something akin to Dropkick Murphys, though it was probably a different band of a similar ilk).

Boasting a playfully 21st century approach to sexuality and an enviable physicality, The 7 Fingers' TRACES is one of the most satisfying and exciting circus shows it's ever been my pleasure to witness. Bravo!
Posted by richardwatts at 10:20 pm

hey mate,
i work at this theatre, and this was one of the best most amazing shows i have ever seen. the only place it fell down was with the audience participation. i agree with you about the soulless cirque de soliel.